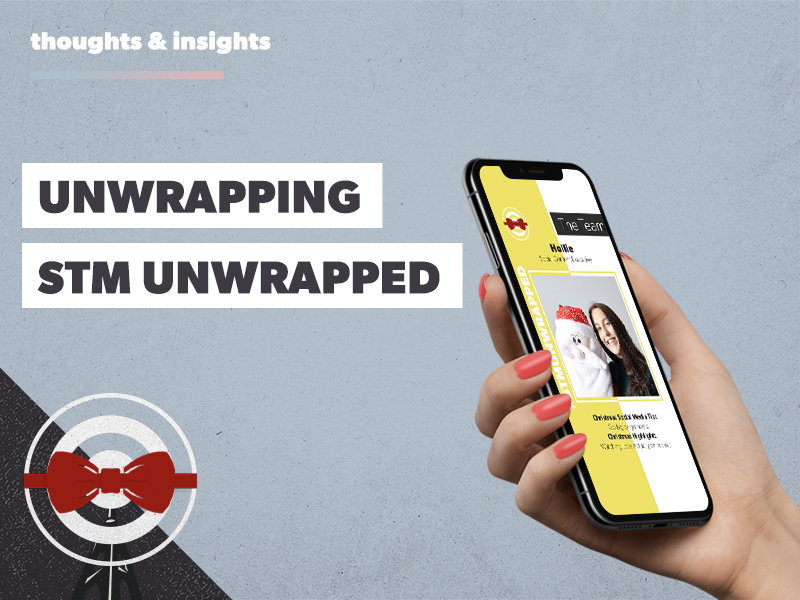 Since joining Shoot The Moon, our placement student, Hollie, has been learning the ins and outs of agency life and social content. As part of her year in the business,

Since joining Shoot The Moon, our placement student, Hollie, has been learning the ins and outs of agency life and social content. As part of her year in the business, she has two projects to take full reign of – first up was STM’s take on Christmas...

At STM, we’re big fans of the festive period, so it’s no surprise a Christmas campaign was on the cards. That’s where I come in… born on Christmas Eve and named Hollie, I was tasked to deck the halls with big ideas to create an STM Christmas like never before.

This campaign had to cut through the noise of social Christmas content, so it needed to be unique, purposeful and a little bit of STM. Not only did I want it to kick start the festivities, I also wanted it to communicate three key things about our company: we’re personable, knowledgeable and at our core, we’re all about creating engagement.

The starting point of this campaign was something iconically STM: our logo – the target. Aside from its obvious connotations to shooting for the moon, our logo stands for everything we do. The rings of the target represent our targeted processes – we’re all about refining wider ideas to create precise strategies, designs and results.

Every month we run our ‘target series’ across social, where our designers get creative and reimagine the target – it’s a chance for our team to have complete freedom, we can create the concept and really showcase our skills.

This led to the idea of ‘STM Unwrapped’, a campaign that welcomed our followers to the team and invited them to get involved with our latest brief: creating a Christmas version of our target logo. ‘Tis the season of unwrapping, and I wanted to create a series that would unwrap the layers of Shoot The Moon – getting to know our people, exploring what we do and presenting an opportunity to interact with us.

To do this we took to Instagram Stories. Stories are a great way to engage with an audience, mainly because they support a really wide range of interactive content, from videos to votes and puzzles. We’ve been keen to test a full campaign on Stories, and ephemeral interactive content was a perfect fit for the objectives of the ‘STM Unwrapped’ campaign.

First, we showed our personable and knowledgeable side, introducing the team with festive photos, our Christmas quirks and top industry tips for the festive season. We then moved on to creating some engagement (and of course, a target).  Our followers were entrusted with full responsibility for the target, taking on the brief and submitting their votes on everything from colours and fonts to styles and formats! It was such a refreshing way to run a campaign and also kept our designers on their toes.

The campaign as a whole was something we really enjoyed.  We got some extra insight into Instagram Stories and even turned results. Across the 29 ‘STM Unwrapped’ Stories that went live, we generated 92% more impressions than our usual average. The Stories managed to generate plenty of engagement, with the gamified colour word search proving to be one of the biggest hits.

With only a handful of votes separating some of the options, the target design could have been completely different – but we left it all down to you, and you didn’t disappoint. You wanted a gold, cartoon-like, target animation – complete with images of baubles, holly, stars and snowflakes and a script like typeface. And boy did you get it! The collaborative target animation which grew from the campaign speaks for itself… a festive treat, right in time for Christmas.